The recipes included in this book were found and tasted by connoisseurs, experts from the world-renowned hotel clubs and hotels of the time. Divided into five parts according to the spirit base from gin, Scotch whisky, Canadian and American rye to bourbon.

Burnett’s gin is a real London Dry Gin. The original recipe was created by Sir Robert Burnett in 1770. It has a typically British character and is a complete gin that offers a pure and refreshing taste. Today, Burnett’s is still on the shelves and applies Sir Burnett’s original recipe. This gin was first produced in England over 200 years ago.

Our protagonist, from Puis le gas y dit, savors a couple of cocktails made from this gin. 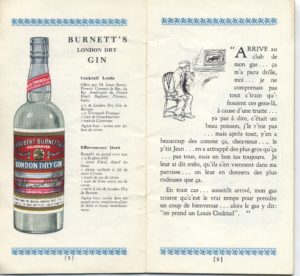 Shake well and serve with a lemon peel.

Fill a large glass with 3/4 of crushed ice

1 egg yolk, separated from the white

Shake well and strain into a large glass. Finally, top with soda water.

Ginnovation: Four new gins that will help maintain the trend of gin