50 Cent filed a motion on behalf of his company, Sire Spirits, in response to E. Rémy Martin & Co, who is suing the rapper for trademark infringement. According to Rémy Martin, the world’s number two cognac, 50 Cent’s Branson Cognac bottle has copied the design of the Rémy XO bottle, claiming it infringes patent and trade rights.

For its part 50 Cent accuses Rémy Martin of wanting to “monopolize the cognac market” and trying to “eliminate” a competitor. Attorneys for Sire Spirits, represented by Akerman LLP, accuse Rémy Martin of asserting false intellectual property rights in a “bad faith” lawsuit aimed more at harming an upstart rival than protecting its brand.

“This action is a naked effort to use meritless litigation to financially destroy a competitor,” Sire’s lawyers wrote Monday. “Rémy Martin must be stopped and the claims against Sire Spirits must not be allowed to survive.”

The rapper was not far behind and posted on his Instagram days after the motion, a publication – which he has since deleted – in which he mocked Remy Martin for being “afraid” of the upstart Branson, created in 2018 through which he sells his circular-shaped bottle of cognac with gems designed by the rapper himself. But on August 13, Rémy Martin filed a lawsuit alleging that the bottle was “almost indistinguishable” from the shape of his own design.

Remy Martin added that through the Branson Cognac design, the brand attempted to mislead consumers into believing the two companies were associated.

But in Monday’s response, lawyers for 50 Cent’s company argued that the Remy Martin bottle design was simply too basic to be locked up by a single company.

“No brand or company has the right to exclude others from making or selling curved bottles of cognac or other alcohol,” Sire’s lawyers wrote. “Nevertheless, Remy Martin is on a mission to eliminate Sire Spirits from the cognac market.”

Back in 2018, the rapper announced his foray into the world of alcoholic beverages. In April of that year, he announced the release of his champagne Le Chemin du Roi, made by Champagne Castelnau, a collective of winemakers in France. Made in the vineyard, the blending phase is followed by the aging phase, which lasts four years. 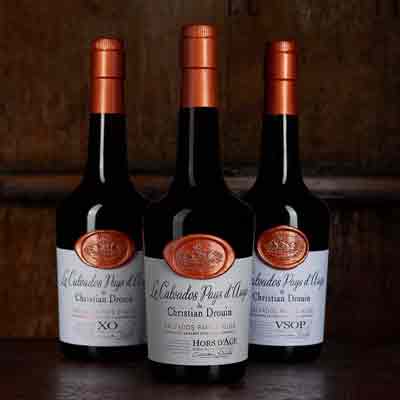 France. The calvados brand Maison Drouin renews its image and comments on its future