Safety is now the watchword of a bar in Staten, New York : GOAT.
Following complaints from women that they had been drugged on social networks, the bar owner, Chris Shaleesh, decided to take firm action against the criminals.
“Monday morning, when I woke up, I had received about a hundred SMS messages, the tweet went viral and we immediately contacted the police and staff and launched an internal investigation” said Chris Shaleesh.
There are 16 cameras, both inside and outside the bar. But apparently, that’s not enough! There will also now be civilian guards in the bar to watch out for dishonest people.
To strengthen the cameras and guards, the bar offers a radical solution: put a lid on each drink….
And the concept is already a success, according to one customer : “I think it’s great. I think it’s really smart. I think it’s really responsible. I think it’s about protecting women and men, men can also take drugs.
The bar also offers the possibility to customize its glasses, with coloured glasses as well as different straws, allowing customers to quickly distinguish their cocktail.

Congratulations to the GOAT management for taking such radical decisions ! 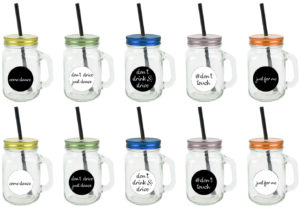