Groult: A unique and authentic quality handed down over 5 generations, part one

We start a journey through the Groult generations, a family of calvados producers known by the same name that started in 1860. Groult represents an exciting journey that is expressed today in the authenticity and unique quality of its eaux-de-vie.

In the Groult family, each generation has marked its passage with an ageing cellar. Today, they are the most beautiful ageing cellars of calvados in the Pays d’Auge. Jean-Roger Groult intends to build his own, while maintaining those of his ancestors.

The tradition has been handed down from generation to generation, highlighting the quality of the products and know-how: first of all, the apples are carefully selected and then sorted by hand before brewing, which takes place from October to December. The cider then rest naturally for one year. Then follows a double distillation via the famous iron stills, heated by wood fire. This long ageing in oak barrels (some of which are more than 100 years old) offers a flavour marked by fruit, finesse and subtlety. Finally, the bottling is also done at the estate, in order to preserve as many aromas as possible.

World-renowned and awarded several times, this distillery has made a name for itself. “What this bottle of Réserve Ancestrale contains is incomparable: the oldest eaux-de-vie on the estate blended with dazzling mastery. On the nose and on the palate, an almost perfect balance between power and elegance, pure charm and exciting complexity” according to Figaro Magazine.

Pierre Groult and his family settled on the farm of the clos de la Hurvanière, in Saint Cyr du Ronceray, between Orbec and Lisieux, in Calvados. He began to produce and age his first eaux-de-vie in the 1850s. At the very beginning, Pierre produced calvados for his family, friends and workers. “Indeed, it was part of the salary to receive his small bottle of brandy” says Jean-Roger Groult, the current successor. 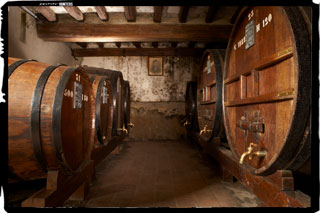 Over time, Pierre’s friends ordered more and more, forcing him to increase his production to build up a stock. That’s how the business begins! Pierre Groult then bought a small still and built the first cellar (where the maturing or ageing of the eaux-de-vie takes place). His calvados won his first gold medal in 1893. The juice of this period is still present in some barrels, from which a bewitching perfume emerges. “From now on, the aroma is no longer woody, over time, these barrels offer a taste of apple tart” according to Jean-Roger Groult.

Today only the Groult family and the famous Japanese collector Hiroyuki Takayama have a bottle of calvados from that time.

Discover all the news, facts and infos about Calvados all around the world thanks to Spirits Hunters’ expertise and blogging.

Video: watch the recipe for French liqueur 44 by Pierre Guillotte