A generation of calvados producers who stand out for their know-how and their contribution to the  sector.

We continue our journey through the Groult generations, the family of producers of Groult Calvados. Groult represents an exciting journey that is expressed today in the authenticity and unique quality of its eaux-de-vie.

In the Groult family, each generation has marked its passage with an ageing cellar. Today, they are the most beautiful ageing cellars of calvados in the Pays d’Auge. Jean-Roger Groult intends to build his own, while maintaining those of his ancestors. This third part focuses on Roger Groult and the mark he left on this legacy, according to our interview with Jean-Roger Groult.

Roger Groult has really given calvados a marketing sense. “He put his name on the label and went to the starred restaurants with his suit,” says his grandson, Jean-Roger Groult. Indeed, he solicited all the famous restaurants and proudly exhibited his calvados in all the competitions.

In 1975, Roger Groult created with his children the S.A. Calvados Roger Groult for the production and marketing of calvados. From now on, he distributes his calvados throughout France and thus makes the company famous. He did not go to school, he took care of the farm from the age of 18 and yet he is “the family’s visionary business man” according to his grandson.

He was wounded in the legs during the war due to a shell explosion. After being immediately sent home, Roger Groult then made his Calvados his battle horse! He bought the third still in the house: the most imposing in the estate and in turn had his own ageing cellar built. His calvados became luxurious, leaving his son a beautiful legacy. 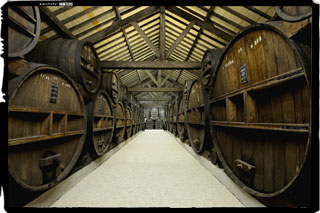 World-renowned and awarded several times, this distillery has made a name for itself. “What this bottle of Réserve Ancestrale contains is incomparable: the oldest eaux-de-vie on the estate blended with dazzling mastery. On the nose and on the palate, an almost perfect balance between power and elegance, pure charm and exciting complexity.” according to Figaro Magazine.

Calvados in 4 lessons (for dummies)

The ABC of Spirits by Alexandre Vingtier: C for Calvados