Asahi Shuzo is working on a sake brewery project in Hyde Park, New York. It is expected to see completion by 2020.

In a recent interview with Asahi Shuzo we confirmed the main facts about the construction of the long-awaited sake distillery. This will be developed in collaboration with the Culinary Institute of America (CIA), the world’s largest culinary university.

Importantly, Asahi Shuzo will focus only on the production of premium sake, Junmai-Dai-Ginjo. In fact, until now, both Japanese and American sake producers have set up breweries on the West Coast, producing only table sake. In fact, a great opportunity for the Japanese distillery to embrace a market that seeks a premium level.

“Our goal is to create an average sake market that lies between the expensive imported high-quality sake and the most reasonable basic table sake currently produced in the United States.” Asahi representatives explain.

“To expand the Sake market, it is necessary to involve new consumers with new premium Sake and at the same time spread the culture of Sake enjoyment. This is our new challenge and also a new challenge for the sake market as a whole.”

The name of the sake is still unknown. However, it will be produced from both American rice and Japanese Koji rice. This, along with other factors such as water, air, among others, will bring a taste quite distant from Japanese Dassai sake. Therefore, we will taste a novelty without any doubt.

Some facts about the construction of the Asahi Hyde Park distillery

The construction of the site begins this year 2019. We are all looking forward to the opening by 2020 of the brewery, covering 4877 m2 of built space in an area of 62 400 m2. Surrounded by green areas and a visiting area for customers to see and know sake, with shop and tasting area. 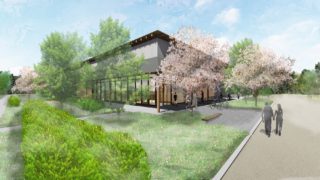