To continue with our historic cocktails, this time we bring Seagram’s Fine Rye Canadian, a pure Canadian rye whisky.

The recipes of our column are compiled directly from the book “puis le gas y dit“, by the Distillers Corporation Seagrams Limited of Montreal.

Another vintage whiskey from Seagram’s is in “Puis le gar y dit“.

“One morning my friend had to go down to town… so I take a big ride in the chariot… (there wasn’t any of that when I was in Montreal before.)

All of a sudden, a guy gets his car hit by our chariot… and the policeman arrives and asks me what I think about it… I’d seen everything…

I said it wasn’t the little chariot’s fault, since he can’t get out of the hunt, can he?… 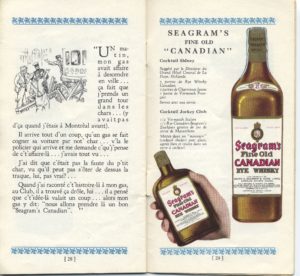 Suggested by the Director of the Grand Hotel Central in The Hague, Holland

Serve with a cherry

Put the ingredients in a shaker with ice, shake well and pour into a cocktail glass.

Whisky, a favourite choice of London bartenders and distilleries