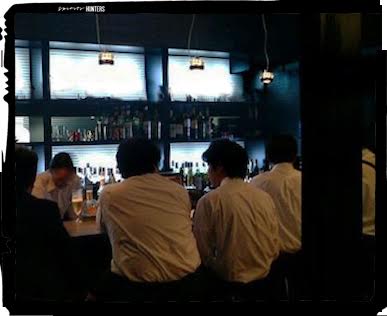 In his book “La dernière goutte de saké“, Etienne Barral compiles stories or chronicles of customs and traditions in Japan. A country that has always fascinated Westerners. The chosen extract immerses us in the atmosphere of a typical Japanese evening in a bar: the character discovers the ceremonial around sake, which is also enjoyed hot.

When he enters this izakaya, half bar, half restaurant without pretension, the salaryman is still an employee, with a mind filled with “norma”, these sales objectives to be achieved to maintain the esteem of his colleagues and superiors.

The sesame that opens the doors of “nomination”: a resounding “otsukare-sama deshita”! “Tired but satisfied, we did a good job together.

Nomination” is nomu (drinking) and komyunikêshon (communication), a typically Japanese neologism forged to designate this particular form of friendly relationships over a drink in the evening after the office. It’s a timeless airlock (and the more glasses are emptied, the more elastic the notion of time becomes), a privileged moment when your section head finally turns out to be less gruff than he lets on when his tie is still in line with the buttons of his white shirt and when the newly hired recruit can risk revealing his penchant for “Visual-kei” rock bands.

After the first beer, quickly emptied, the guests quickly consulted each other to define the rest of the celebrations. Shôchû (brandy from Kyûshû, made from rice, barley, buckwheat or sweet potato, with more than 25% alcohol)? Awamori (rice alcohol from Okinawa, quite popular among young people)? Reishû (cold sake)? Atsukan (hot sake)? A warm sake is fine, although the “good” sake is appreciated cold to better perceive its aroma. Serving hot sake is a very delicate exercise.

When the tokuri (the porcelain or clay vial in which sake is heated) arrives on its tray with the o-choko (small sake glasses), it takes a great sense of self-sacrifice to grasp, between thumb and index finger, the burning rim of the tokuri (so called because the sound of sake poured into a cup makes it “tokuri, tokuri”) and pour its contents to its neighbours.

Impossible to grasp the container with full palms still very hot, only the two fingers are used, victims of this sadistic rite. Also be careful not to let the cut clumsily overflow on the fingers of its owner….

However, the tension dissipates as the sake is distributed among the guests. To the touch, the earthen container loses its heat and suddenly becomes more frequent. But paradoxically, it is the moment when he is the most treacherous: without any visual reference point to objectively assess the situation, the tokuri expires its last drop of sake, often in the middle of a cup that is still half empty.

To remedy this embarrassing situation, there is only one solution: “o-kawari! ” (Another one!). And it is thus, from tokuri to tokuri, that the evenings in Japan are prolonged…

Top three spirits from Quebec that you must taste