The recipes in this book were found and tasted in buffets of connoisseurs, experts from hotel clubs and world-renowned hotels of the time. Divided into five parts, based on alcohol, gin, Scotch whisky, Canadian and American rye and bourbon.

Now the protagonist and our friend’s “gar” are going to a golf game. An anecdote for the traveller who tells “I don’t understand anything about these games…”. He refers to it in plural, because of course, the night before, they were watching a football game.

In any case”… the game over, we go back to the Club and there, we needed a shot in honour of the winner, who, as they said, was the least worse… so my friend says: ‘We’ll have a good Golden Wedding’ “.

An anecdote where, once again, spirits bring this group of people together in the tasting ritual. Here are two recipes based on Golden Wedding rye whiskey. This whiskey, today extinct was also produced by Distillers Corporation Unlimited in the 1930’s. 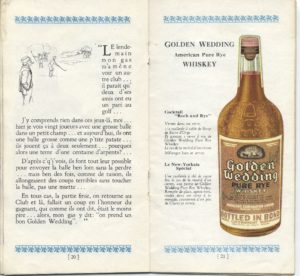 Pour into a glass:

1/2 tablespoon Barley Sugar Syrup, and add 1 glass of Golden Weding Pure Rye Whiskey. The juice of half a lemon. Then mix well and serve.

One teaspoon of fine sugar

The juice of half a lemon

Fill with ice, shake well, pour into a lemonade glass, crown with a little Claret and serve.